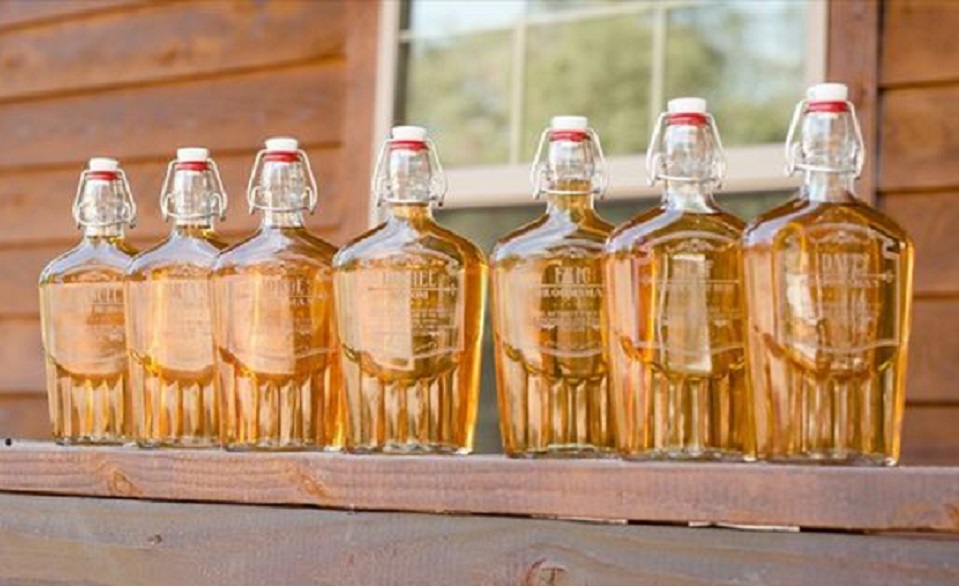 The Swing top glass bottle is very popular and easy operated by hand. It is also named as a flip-top, swing-top, or Quillfeldt stopper (after the inventor, Charlies de Quillfeldt) is a type of closure frequently used for bottles containing carbonated beverages, such as beer or mineral water. The mouth of the bottle is sealed by a stopper, usually made of porcelain or plastic, fitted with a rubber gasket and held in place by a set of wires. The bottle can be opened and resealed repeatedly and without the use of a bottle opener, with the wires acting in the same way as a latch clamp. The flip-top was the dominant method of sealing beer and mineral water bottles prior to the invention of the crown cork. The top closure is sometimes called a bail closure.

To be more sustainable when using a swing top glass bottle 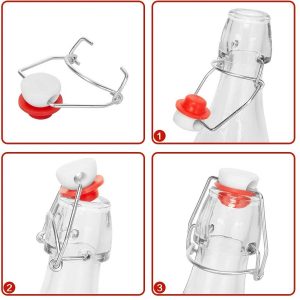 If your gaskets are old or dried out, which will happen if stored in certain climates or environments, they may just need replacing. You can grab a pack of replacement seals very cheaply on our website these days. You can also try periodically rotating your seals each time you clean and sanitize them just so that they don’t wear out on a particular spot due to pressure etc. 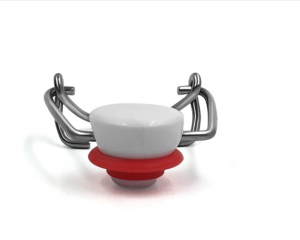 If the wires which hold the cork in place are damaged and bent out of an angle that pulls the mechanism closed, it’ll pop open or give a bad seal.If this is the case for you, then you can use some plyers to squeeze the wires back into an effective shape.

Why is a swing top glass bottle nowadays so popular?

A swing top bottle is a bottle that can be re-sealed over and over again without needing a bottle opener. The swing top itself is an O-shaped rubber ring affixed to a plastic or porcelain stopper. The stopper can be opened and closed with a metal wire bail mechanism that is easy to flip up and down manually. Before the swing top was invented, glass bottles were typically sealed with a cork, which are notoriously difficult to open by hand or re-seal with assurance that the contents of the bottle are food-safe.

Sometimes called a “flip top,” the swing top bottle closure was invented in the United States by a man named Charles de Quillfeldt in 1847. Often used for carbonated beverages like mineral water and beer, the swing top bottle has grown in popularity over the years. Home-brew beer enthusiasts, inspired by the iconic beer brand Grolsch, swear by swing top bottles, as it keeps beer in its most fresh and crisp condition. People are very excited to use a swing top bottle for our Water Gallery product not only because of the ability to re-seal it and because it’s got a nice aesthetic to it, but also because it provides an eco-friendly drinking vessel for our customers, allowing people to reuse our glass water bottles time and time again over an extended period of time.

Many people enjoy ordering a glass bottled water at a restaurant to share at a meal, but the majority of these bottles either end up in the recycle bin or the trash after just one use. What a swing top glass bottle offers to the user is the ability to reuse and re-seal the bottle multiple times. Not only is this an environmental-friendly option, but also this allows people to use their bottles for many different beverages, in many different settings.

For example, once you open your swing top glass bottle for the first time, refill it with fresh water, seal the swing top, and stick it in the fridge for the ability to keep the water contents pristine and cool for your next use. Or take advantage of the hermetic food-safe seal that the swing top bottle provides to fill your flip top bottle with a special olive oil, light-colored vinegar, or beverage of your choice, such as white wine or various liqueurs.

These bottles can be re-sealed after each use, hand-washed over and over again, and reused as many times as one chooses. Swing top bottles are infinitely useful for storing various beverages, displaying whatever you wish to keep inside of the bottle, and preserving home-made oil or other liquid specialties.

Swing top bottles are an excellent choice for bottling homebrew. Their design makes them quick to seal, strong to withstand high levels of carbonation, aesthetically pleasing and good at preserving beer. Using them makes your bottling day shorter and is less cumbersome to use than a bottle capper.

Just through some people’s experience of bottling beer on a weekly basis for the last couple of months, they always find that using the swing bottles they have for each batch is better. This is for several reasons:

As I’ve mentioned before, with my technique, using swing top bottles involves a lot less fiddling about.

I usually bottle sat down with my sanitized bottles in boxes on one side of me, a table with caps and capper the other side and the bottling bucker and auto-siphon in front of me.

When capping I have to fetch a bottle, fill it with the auto-siphon tube, place the tube somewhere clean while I pick up a cap and capper, then place the bottle between my feet to close the cap effectively.

With a swing top, I can literally close it with one hand, or at least without having to place the bottling tube into some sanitizer while I do it. It gains me perhaps 10-30 seconds, which on 60 bottles really adds up!

As I recycle lots of different types of bottles, both conventional long necks and swing tops among others, each bottle can be easier or harder to seal than the last.

With a swing top purely due to its design, the seal is perfect 99.9% of the time, the first time. It’s just an easier experience from my point of view.

To my mind, swing top bottles are also a little bit sturdier than the more widely used long neck variety. They often hold beer which is more carbonated, which requires a stronger bottle.

They also need to accommodate the wire locking mechanism, which requires thicker glass, at least around the neck. All in all, it’s just going to reduce breakages and explosions due to too much pressure.

What can I say, when you hand someone a homemade beer in a swing top bottle, you just look cooler!

In brewing, whenever you use a beer bottle you’re always going to get some sort of inconsistency with your bottling. From one batch to another you could see a difference in the carbonation level of your beer.

Sometimes it might be your swing top bottles, especially if you’ve used them a few times. There are two main culprits to this:

Yes, absolutely. Swing top bottles can be placed in the dishwasher with or without the cork system being removed.

The heat shouldn’t damage the rubber parts in any way. However, just remember that you still need to thoroughly clean the bottles inside before using them, a dishwasher won’t clean them but rather acts as a good sanitizer.

When you buy your brand-new swing top bottles from the store or online they will arrive disassembled.

There are two main parts, the bottle, and the cork with the gasket and wires attached.

Troubleshooting: often the biggest problem is when you put the sealing mechanism on the wrong way, that’s why you need to start with the cork in the bottle and work from there.

If you haven’t got the ring wire sticking out on the outside, then flip the entire mechanism over. This should solve the problem and enable you to fit the latch system properly.

Can you reseal swing top bottles?

Yes, without a doubt you can definitely do that! Whether or not you mean “can you reuse a store-bought bottle for homebrewing or if you can take a swig and reseal it?” may need a slightly different answer.

There is no issue reusing swing-top bottles, in fact a lot of companies seem to be leaning towards the reuse of their products anyway.

It’s not like beer lovers in the olden days wanted to drink a sip and then close the bottle again for any reasons of taste or hygiene. However, it is true that the Beer Stein championed in Germany was invented to keep things out of your beer.

In fact, the swing-top bottle was a predecessor to the more ubiquitous crown caps (invented in 1892) which most brewers are familiar with. So, it was just the best system of the day to keep beer in the bottle.

Where to get your swing top bottles

MC Glass Bottle is the reliable swing top glass bottle manufacturer, creating custom glass bottle from concept to shelf. Depending on where you live and the beer styles you like to drink, you may find it easier to source bottles more cheaply. Cover the following capacity and shape.

I personally recommend that you simply recycle beer bottles as not only can you taste even more types of beer, you are also reducing the demand for producing bottles to some extent.

Just make sure that you keep the bottles nice and safe while they are in your care and check each one in the light for any hint of a crack or damage to the latch mechanism.

These beautiful swing top glass bottles are reminiscent of old-fashioned bottles. They are BPA and lead free. The stainless steel closures won’t rust in the dishwasher and the tops close so well that you might occasionally find them a little hard to open.

But that’s a good thing, especially when you’re fermenting. And one of the most popular uses for these bottles is brewing kombucha.

How to Create a Custom Glass Bottle